Schmelz is in the fire resistance classification with E90, E60, E30 class doors. With Schmelz EI60 and EI30 class doors entering the security area. These types of automatic doors are fire resistant, which ensures high traffic of people and also full security it is a type of door. Recommended for airports, hospitals, railway stations, public buildings. Shopping centers, entertainment centers and comply with current regulations in all buildings that must be compliant.

Schmelz automatic doors are produced to provide a wide and clear opening for convenience, with a single-wing or two-wing opening automatic door system.Schmelz fire-proof wings become fully fire-proof when closed. Schmelz fire-proof door as standard. It works as follows: The Schmelz fire resistant automatic door system automatically closes the wings in the event of a fire alarm. Closed but unlocked, allowing them to be opened manually at any time. Gaps when the temperature reaches the required level Special tapes swell and seal. The door has a certificate of conformity to the European Standard EN 13501-2: 2004. Elements according to the fire resistance performance obtained '' relating to the "Building products and classification of construction" EN 1634-1: 2000, "Fire resistance tests for fire doors and shutter assemblies" on EI60, EI30, E90, E60 and E30 doors. The tests were carried out under the strict control of the Official Laboratories. The Schmelz fire door was specially designed and manufactured. 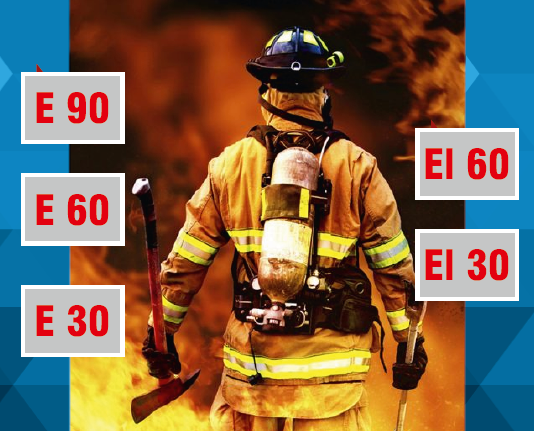